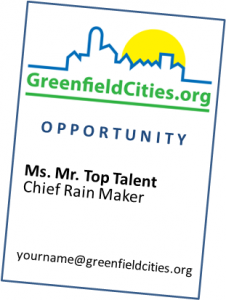 GreenfieldCities is opening a new office in Jordan. That is why we are looking for talented Jordanian or Syrian nationals who want to contribute to the mission of GreenfieldCities.  Women are especially encouraged to apply!

Do you live in Jordan, are you willing to work in Mafraq, do you support the principles of GreenfieldCities and do you have a flexible mind-set, then please take a look at the vacancies by clicking on the links and follow the application procedure as described over there.

If you don’t find a match with your skills, but are you still interested to contribute to our organization, please send an open application in English to jobs@greenfielcities.org including your CV/ resume and a short motivation. We will do our best to respond as soon as possible to all applications and look forward to recruit talent with the drive and potential to make our organization flourish in Jordan.

We are inching closer to significant support from the Dutch Ministry of Foreign Affairs. In the meantime we completed internal workshops on the GFC campus in Jordan. We refined the Campus goals, defined the desired relationship with Mafraq town, and studied Jordanian sector policies.

These workshops also aim to prepare our Syrian and Eritrean volunteers for their future roles as full-fledged employees. This is very exciting as our most talented volunteers will get an official Dutch working contract with us.  Leaving the Dutch governmental social payment (“uitkering”) system is a major step for our volunteers.  It boosts  their independence, self-confidence and professionalism. As GreenfieldCities we are very proud and grateful to facilitate the professional and personal growth of our team members. We invest a lot of time in continuous capacity building, e.g. effective writing in English, financial accounting, or project management skills. 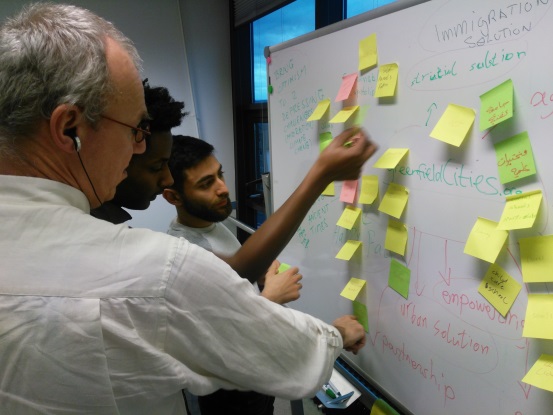 Some of our volunteers have even gained the confidence and skills to establish their own business or to land a good job at another Dutch employer. That is why we proudly say goodbye to one of our early stage volunteers. Ghaz, our Junior Marketing Manager,  is going for a new professional adventure. We wish him the best of luck in his future career.

On the other hand we are happy to welcome Hedzer Roodenburg Vermaat. He will be our Country Director, managing our activities in Jordan. Hedzer will build his own local new team of Jordanians and Syrian refugees. This means that we will recruit new members (preferably female) for our team in Jordan! Vacancies will be available on our website soon. 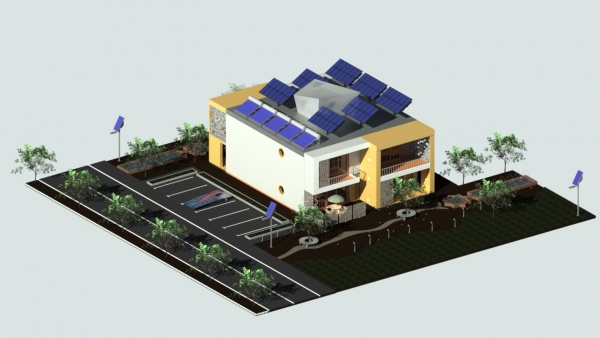 The work on the design of the Mafraq clean-tech campus gets more detailed.  Italian architect, and GFC team member, Paola Fusco works on a flexible and energy efficient design for the residential constructions.

We also work on the systems design for the utility infrastructure and on low impact street surface solutions.  We expect to present a lot of design progress and development news in the coming months, so stay tuned.

“We happily contribute to causes that aim for a fundamental solution of a problem” answer Janneke van Beek and Gerard Sipkema to our question why they gave such a big donation to GreenfieldCities.

Just before the summer break GreenfieldCities received the one of the first big, personal donations from Janneke van Beek and Gerard Sipkema. She, a lector on an advanced college and family therapist; he, a former lector Sociology and former trade union board member.

Pleasantly surprised we asked the generous givers about the why of their action. “We always gladly give to our traditional charities, but what really speaks to our heart is that GreenfieldCities works towards a structural solution for the migration crisis. Additionally, you make it very tangible with the plan for a campus in Jordan”. They think it is fantastic GreenfieldCities develops these plans with refugee talent that is now living here in the Netherlands. “At the same time GreenfieldCities offers refugees a very meaningful job; that in itself already prevents a lot of integration problems here. Even for relatively well-educated refugees the perspective on a paid job is very bleak indeed. They will often need social benefits for a long time.” This is even more true for poorly educated people. As a language mentor Gerard Sipkema helps a hardly educated, yet very well skilled Syrian craftsman. “The language and cultural gap are so wide”, he observes, “almost impossible to bridge. Only after a generation the perspective gets better. Poor integration in Dutch society also causes tensions with native Dutch people” Gerard states. “Providing sustainable shelter in regions that are much closer to their culture and values is to be preferred”.

“We try to live according to a christian ethos (where “giving tenths” is important), but in almost every belief or philosophy looking after your neighbour in need is a key value”, says Janneke. “From all motives or perspectives we Dutch can contribute”. “Just because GreenfieldCities has an ANBI certificate, the tax office also contributes to this noble cause. That is a great afterthought” they conclude. 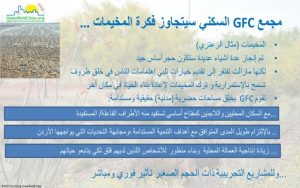 GreenfieldCities is working on Arabic language content to better inform that specific stakeholder group. Proper writing in Arabic is an art and therefore we seek a specialist to reinforce our team.  Those who think they are up to the challenge can have a look here.

GreenfieldCities has engaged in talks with the Alfen company  on the energy solution for our first project in Jordan. 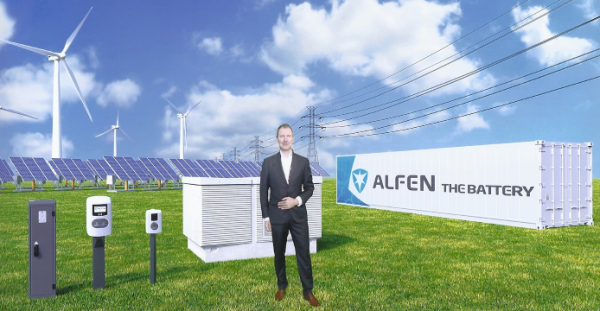 Alfen  is an industry leader in energy infrastructure solutions.  Alfen’s extended experience with complete micro grid solutions, including production, power management and storage can contribute strongly to the quick realization of the GreenfieldCities Jordan Campus . 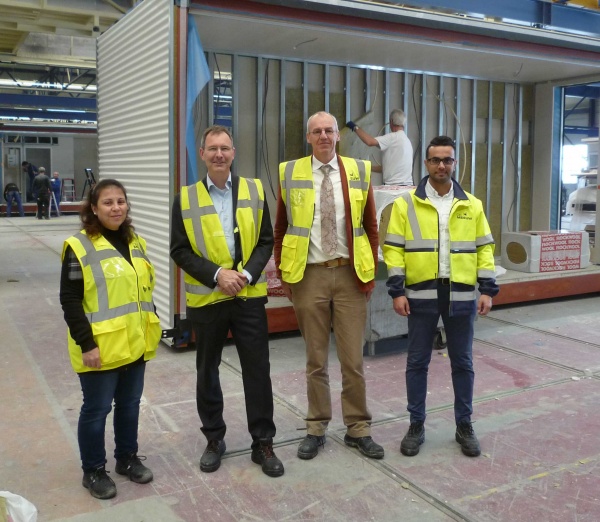 Within the framework of the preparations for the first project in Jordan, the engineering team of GreenfieldCities paid a company visit to De Meeuw. This company is an industry leader in high quality flexible building solutions. GreenfieldCities have chosen to kick things off using a pop-up concept. This has several benefits. Results can be achieved quickly. And  having the initial design and built phase in Europe helps to de-risk those activities and secure certain pre-set sustainability performance levels. Ultimately, this approach also benefits the local society and economy. By establishing a presence in Jordan quickly we can start focusing faster and better on development of permanent infrastructures and buildings and local job creation.

De Meeuw’s  concepts are designed and constructed to have second and third lives, and feature flexible lay outs and high energy and water usage efficiencies.  De Meeuw offers buy back guarantees and already reaches 60% re-use of materials and components. Their goal is to up that number to 90%. Last but not least, De Meeuw are used to work in co-creation processes which fits the GreenfieldCities philosophy very well.

GreenfieldCities is supported by Gieling Consultancy, who drew up the first sketches for our Clean Tech Campus based on the recent Jordan site visits and local partner talks. 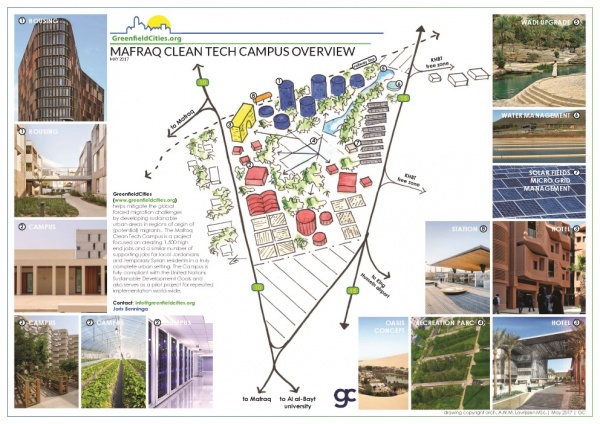 During our second trip to Jordan, we did more extensive studies of the chosen project site. It looks remote and empty, but it is actually only about 2 kilometers from the lively Mafraq city center. 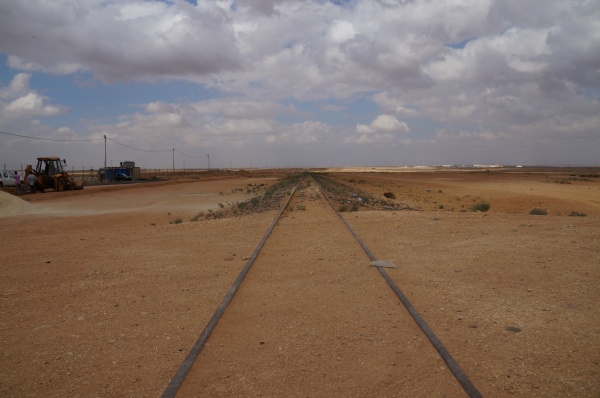 We also figured out ways to use the existing railway corridor to connect the planned GreenfieldCities campus with the Mafraq city center. 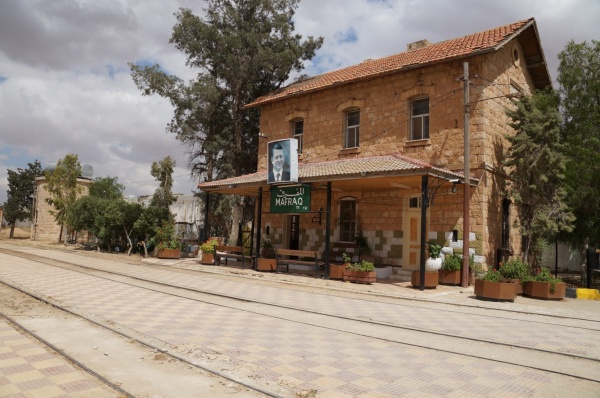 And last but not least, we had many on-site meetings NGO’s, EU- and EU-Country representatives and possible private sector partners. 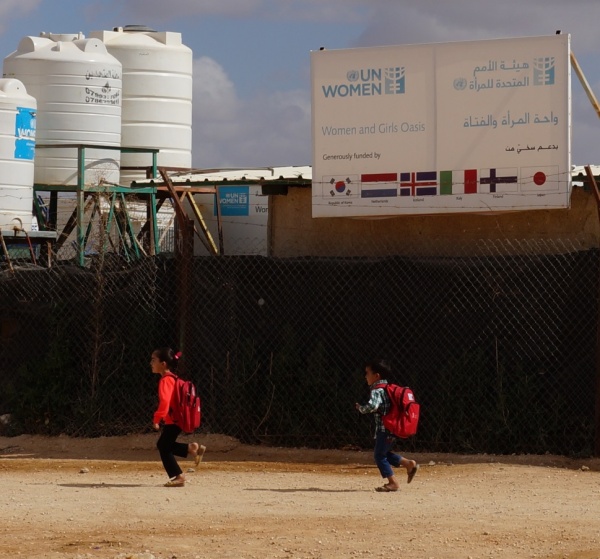 These visits help us to get closer to our short term goal, a GFC development team on the ground in Mafraq in Q3 or Q4 of this year.

The Netherlands national Platform Integration & Society executed and published research on the options and instruments that local governments can use to to stimulate companies to hire (more) migrants.  GreenfieldCities collaborates on a day to day basis with local public and private parties and was happy to share this practical experience with the researchers.  The final report (in Dutch) is here.